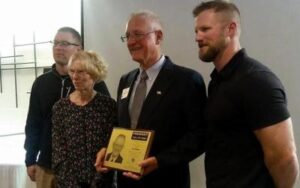 Ed Norden, jeep tour guide for Colorado Jeep Tours, and former Fremont County Commissioner was inducted into the Fremont Hall of Fame on April 20, 2018, along with three other recipients. Following is the story that appeared in the Canon City Daily Record.

John and Mary Kay Evans, Ed Norden and Dorothy ‘Tiny’ Striegel were inducted into the 2018 Fremont Hall of Fame on Friday, drawing the largest audience to date for the 11th annual banquet.

John and Mary Kay Evans are known for their senses of humor, their dedication to serving others and their commitment to education.

“From the time that they met almost 50 years ago to today, their daily activities are focused on improving the lives of others,” the couple’s son, Matt Evans, said during their introduction. “When considering their resume, the thing that impresses me most is the wide variety of issues they have supported over the years.”

Those issues span from religious, spiritual, educational and sports to human rights, social justice, fine arts and programs for the youth and elderly. The couple has served on the Cañon City School Board a combined total of 21 years.

“It’s no wonder that I ended up as a special education teacher when I have role models like them leading the way,” Matt Evans said. “In their careers in the criminal justice systems when many condemn and vilify people who have made bad choices, I’ve always admired how my parents treated those individuals with the dignity and respect that all humans deserve.”

The couple said they were humbled to be among the past and new recipients of the Hall of Fame award, who also have given much to the community.

“Our lives have been driven by the love of God, and we feel if you use the word ‘love,’ it can only go hand in hand with service — do all you can for the good of another,” Mary Kay Evans said. “We love kids and we feel it truly does take a village to raise a child, especially since they are our future.”

John Evans thanked all those who do for others who are less fortunate.

Ed Norden was the first Fremont County Commissioner in more than 30 years to serve three terms in office. During those 12 years, he helped to build the general fund reserves from $305,000 to more than $2 million, and he proposed adding county funds to the Colorado Opportunity Scholarship Initiative that provides scholarships to low-income students.

Fremont County Manager Sunny Bryant said Norden developed a positive relationship with citizens and employees of Fremont County through his open-door policy and outgoing personality, and he had a way of finding common ground with citizens, even when they didn’t always see eye to eye.

Norden also has served 25 years on the Advisory Board for the Fremont Campus of Pueblo Community College, and he was instrumental in helping raise funds for the current campus through radio-a-thon fundraisers.

“Ed has played a critical role in me being where I am today, and for that, I am forever grateful,” Bryant said. “He has given me a vision of what a government official should be, and I strive every day to serve the community like he has.”

Norden said to be among the other honorees, those whom he has admired throughout the years for their work and dedication in the community, is an honor in itself.

“As important as my career in radio has been, I look upon my 12 years with Fremont County as a personally rewarding experience,” he said. “It’s not just because of the things we accomplished as a board of commissioners, it was because of the people I got to work with — county employees and citizens in the community, friendships that I made with made with many people in this room tonight, and the respect that I have for who you are and the work that you do.”

Dr. Jim Puckette traveled from Oklahoma to introduce Striegel during Friday’s event. He said Striegel is known for her sharp mind, and she is a gifted artist and poet. Her paintings of people who made up the fabric of Cañon City are on display at the Royal Gorge Regional Museum and History Center. They’re not politicians or well-known individuals, but everyday citizens whom she did not want to be forgotten.

In 1990, Striegel and her second husband, Ernie, donated part of their family ranch to the Oklahoma State University Foundation to be used as a permanent home for the Les Huston Geology Field Camp. She and her family has supported the camp since 1949, and she visits there at least once a week when it is in session each spring and brings photos and mementos that explain the camp’s history.

“We’ve had over 1,000 students go through the camp, representing 73 different universities and colleges who have come to Cañon to enjoy the geology here,” Puckette said. “Tiny is a true supporter of education. Tiny and her family wanted to ensure the education of thousands of students in geology, and that is their wish, that geology continues here in Cañon City.”

Striegel, 96, said her induction into the Hall of Fame is the greatest honor of her life.

“There are so many people who deserve it more, but I humbly accept it,” she said.

Also during the event, Newmont Mining Corp. was recognized for its scholarship award. The Newmont Scholarship fund will provide five, $1,000 scholarships for the 2018-19 academic year to students pursuing higher education through the Fremont Campus.

Dr. Lana Carter, dean of the Fremont Campus, also was honored for her upcoming retirement, and PCC Hall of Fame scholarship recipients Michelle Bauer, Rachel Bauer, Kacee Leonard and Kaylee Archuleta were acknowledged. Leonard, the student scholar speaker, said the scholarship helps so that she doesn’t have to take out more student loans.

“I hope all the donors realize what a large impact contributions that are made to educational efforts have not only on myself but also the other scholarship recipients,” Leonard said. “Without a doubt, I can say that the generosity and support provided to me by the PCC Foundation has helped me to achieve my dream of becoming a registered nurse, and I am forever grateful.”

Let us plan your unique tour. Whether it’s a few hours or all day, let us show you the best of Canon City!

Need a great gift for the person who has everything? Give the gift of adventure with an e-gift card!